Mexico’s aerospace industry is booming. Growth in this sector accounts for 145% over the past 10 years featuring export volumes of 8,600 million Dollars in 2018. That way, the country is the 12th biggest exporter of aerospace parts worldwide. 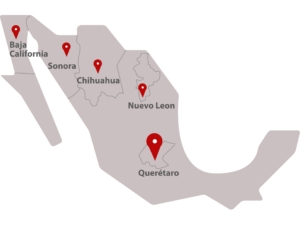 In Mexico, there are over 320 international and local companies operating in that sector; 80% of these are manufacturing companies. Such companies are mainly located in the Northern states of Baja California, Sonora, Chihuahua and Nuevo León and the central state of Queretaro.

Undoubtedly, Mexico’s aerospace industry has been growing over the last decade – Several beneficial and competitive advantages for the aerospace sector are present in such locations.

Economy: A relevant number of free trade agreements are part of Mexico’s economy. A total of 12 free trade agreements have been entered into with 46 nations. This represents attractive trade benefits for foreign corporations. Likewise, at macroeconomic level, the Mexican economy is regarded as highly stable.

Geography: Mexico’s geographical location in the American Continent is also considered as a suitable advantage. Mexico is the link between Northern, Central and South America.

Demography: Mexico’s population is mainly integrated by young adults which, in turn, represents a great advantage for employment opportunities. Labor in Mexico is relatively cheap, and this also makes the country attractive for foreign companies.

Education: As a result of the positive development registered over the past years, the aerospace sector has also been well positioned in academic fields. For example, the Instituto Politécnico Nacional and the Universidad Autónoma de Nuevo León have funded specialized aerospace schools. In Querétaro, the Universidad Aeronáutica de Querétaro was officially inaugurated in 2008. Those education measures significantly contribute to permanently improve the quality level of young aerospace workers.

A great number of foreign companies have acknowledged and profit from Mexico’s competitive advantages. From 1999 to 2017, about 3.2 billion Dollars were allocated to the Mexican aerospace industry in terms of direct foreign investment. A third of it was invested in Querétaro.

Attractive opportunities are offered in Mexico, especially for those small and medium size companies. The supply base is not yet consolidated and therefore great opportunities to fill the market gaps are available.

According to Femia (Federación Mexicana de la Industria Aeroespacial), an aerospace sector industrial association; some areas in this field are particularly promising such as turbine components, fuselage and landing framework, surface treatment and refinement.

The increase in the aerospace sector’s international activities has changed Mexico’s corporate scenery, especially that of Queretaro.

Bombardier, a Canadian company; settled down in Queretaro for operations start up in 2005. The company is now planning the construction of its 12th plant facility in Mexico. In 2007, the French corporation Safran followed Bombardier’s example. The manufacturer of wings and motors is currently running eight factories in Querétaro. With German participation, Airbus has been producing doors for helicopters and aircrafts in Mexico since 2013. Other foreign companies are Aeronnova del ITP from Spain and General Electric from the United States; also settled in Querétaro.

It becomes clear that the aerospace industry does not only hold a strategic position in Mexico’s economy but at the same time, it represents an attractive investment opportunity for foreign companies.

The NOM-035 in Mexico: Psychosocial risk factors at work
Scroll to top