In Mexico, November has begun with a very special tradition: the Día de Muertos (“Day of the Dead”) which is celebrated every year on the second day of November. Recently and together with Disney’s film Coco the event has attained worldwide reputation. This celebration has some particularly fascinating characteristics –death is regarded as joyful and not as a sad event. The blend of different cultures and religions that have shaped such tradition throughout history is likewise unique. Therefore, this comes as no surprise that the Día de Muertos was awarded the title of Intangible World Cultural Heritage by the UNESCO in 2003.

The Día de Muertos tradition dates back to the Pre-Columbian civilizations inhabiting Mexico before the arrival of the Spaniards. The Aztecs, Mayas, Totonacas and Mexica cultures celebrated death 3000 years ago. This tradition is based on the belief that human soul follows its journey with utensils and food to the world of the dead after passing from this world.

Along with colonization, Pre-Columbian traditions changed with the arrival of Catholicism as new influences were adding to the process. In other words, due to Mexico’s geographic location and vicinity with the US this tradition was partially “halloweenized”. In spite of the foregoing, neither Catholicism nor Halloween managed to take the place of this Mexican tradition; it was rather supplemented with additional components. The belief that the souls of the death return to the living world on this day has prevailed.

One of the most representative characteristics of the Día de Muertos is the Altar de Muertos (Altar for the Dead). It is built and decorated for the dead using different objects and materials. Each component has a particular meaning. The size of the altar is critical and has a special meaning. A two-step altar is allusive to heaven and earth; a three-step altar represents the underworld, the purgatory and the world of the death. On the other hand, an altar with seven steps represents the different phases underwent by the souls on their way to earth. Depending on the number of steps, different objects will be used in each level.

Altars are built in public places of towns and villages all over Mexico. In addition to this, it is a tradition for every Mexican home to have its own small Altar de Muertos for the deceased relatives.

This is a list of things that should not go missing in the Altar de Muertos and their meaning: 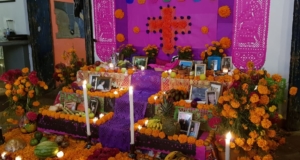 Salt: The salt is usually scattered on the altar in the form of a cross. This emphasizes the impact of the Catholic church on the tradition. At the same time, however, the salt also stands for a symbol of soul purification which in dates back to Pre-Hispanic beliefs.

Water: A glass of water is a must in any Altar de Muertos. On the one hand, the water represents the purity of the souls. On the other hand, it helps to quench the visitors’ thirst after their long journey.

Candles: Candle flames are the guiding lights for the souls on their way.

Cempasúchil flower: Orange flowers called cempasúchil decorate the Altar de Muertos. Their scent is meant to guide the souls on their way.

Colorful paper garlands with punched out motifs: To make it even more colorful, the altar is decorated with papel picado (ticker paper) to show the festive joy. It also represents the wind. 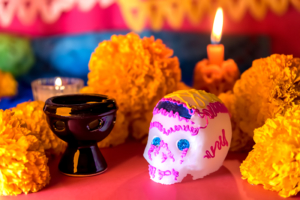 Skull- shaped sweets: In Pre-Hispanic cultures, a common practice was to preserve the skulls of the dead with the purpose to display them in rituals symbolizing death and rebirth. Today, skulls made of sugar, chocolate and amaranth are used instead.

Food and drinks: Culinary diversity is also an important part of the Mexican culture and is also reflected in the tradition of the Día de Muertos. The favorite food of the deceased is displayed on the altar, so that the souls can recharge with a delicious meal after their long journey. 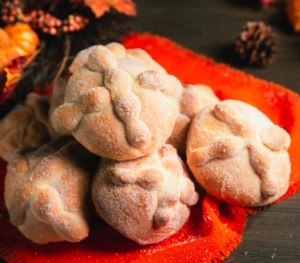 Pan de Muerto: The “bread of the dead” is traditionally an important ingredient of the Día de Muertos. Its importance can be construed in many different ways as this can have whether a cultural or a religious background. By following the Catholic tradition, the strips of dough on top of the bread bun form a cross. On the other hand, and according to Pre-Hispanic beliefs, these dough strips look like crossed bones symbolizing death.

The Día de Muertos Mexican tradition fascinates people from around the globe. This event attracts more than 7.5 million international tourists every year meaning considerable economic inflows. According to the Ministry of Tourism, festivities this year are expected to generate nearly 4 billion pesos on the tourist sector.

One of the most popular tourist destinations to celebrate the Día de Muertos festivities is the city of Pátzcuaro in the state of Michoacán. The state of Oaxaca and Mexico’s Capital city are also popular destinations. This year, about 100,000 international and 300,000 national tourists were expected to visit Mexico City for day of the dead festivities.